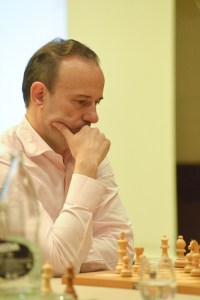 Neoclassical chess was invented by Gabriel Fernandez-Bobadilla, a chess aficionado (FIDE Candidate Master) who has taken up the game again a year and a half ago after 20+ years of absence. Federated in Madrid, Spain, and FIDE Candidate Master[1]. He has been mostly involved in his academic life in the application of mathematical models to different areas: control theory and robotics, aerospace and electrical engineering, and financial economics. He has been working for the last 15 years as an investment management professional for a Spanish-based asset management company and family office.

Gabriel received a Master’s degree in Economics and Finance, from CEMFI (Centro de Estudios Monetarios y Financieros, Foundation of the Bank of Spain), with 1st of class honors (“Premio Extraordinario”), with a master’s thesis on stochastic models of the term structure of interest rates (the yield curve).  He also holds a Dr.- Ing. degree in Applied Mathematics from Universidad Politécnica de Madrid (U.P.M.), with a doctoral thesis on matrix models of linear dynamical systems and a Master of Science in Electrical Engineering from Caltech (California Institute of Technology, Pasadena, USA, 1990), where he had the support of a Fulbright scholarship, studying robust control. Gabriel first graduated as an Industrial Engineer (U.P.M., Madrid, 1989), with specialization in control theory and electronics, achieving 1st of class honors and being awarded the distinction to the top nationwide graduate in his studies (“Primer Premio Nacional de Terminación de Estudios”). Since 2001 he holds the CFA (Chartered Financial Analyst) designation from the CFA Institute”.